Ireland is a country steeped in history, culture and folklore. We have our mythological figures from the Tuatha Dé Danann and the Fomorians to Cú Chulainn to the Salmon of Knowledge. We have had kings and famines and invasions and we do our best to remain in touch with our roots.

One part of our heritage that is still on view today are the amazing castles and castle ruins which decorate our countryside. In fact, there are believed to be over 30,000 castles and ruins in Ireland. Not all of these are grand, huge affairs like we see in the movies. Some are smaller and much more modest.

But the question is, what are the best castles near Dublin? What are the must-see structures that provide us with the echoes of the past? Let’s take a look at four such castles in Dublin and two in neighbouring counties. 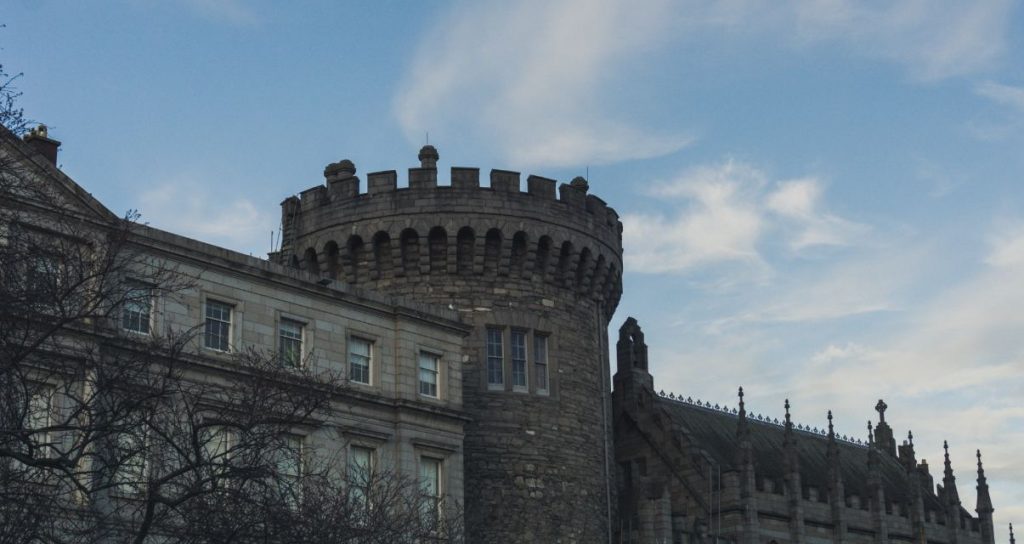 Ok, so this is a no brainer. If you’re going to visit Dublin and you want to go castle-viewing, then it only makes sense to start with Dublin Castle! It dates back as far as the 13th century and was built on top of a Viking settlement. For over 700 years it was the seat of English and British rule in Ireland and is now a government complex and major tourist attraction.

The State Apartments within the castle are open for entry through guided or self-guided tours. The castle is beautifully decorated with sculptures, paintings, furniture and much more that dates back from the 17th century to the present day.

The castle is centrally located between Temple Bar and St. Stephen’s Green and admission is free. 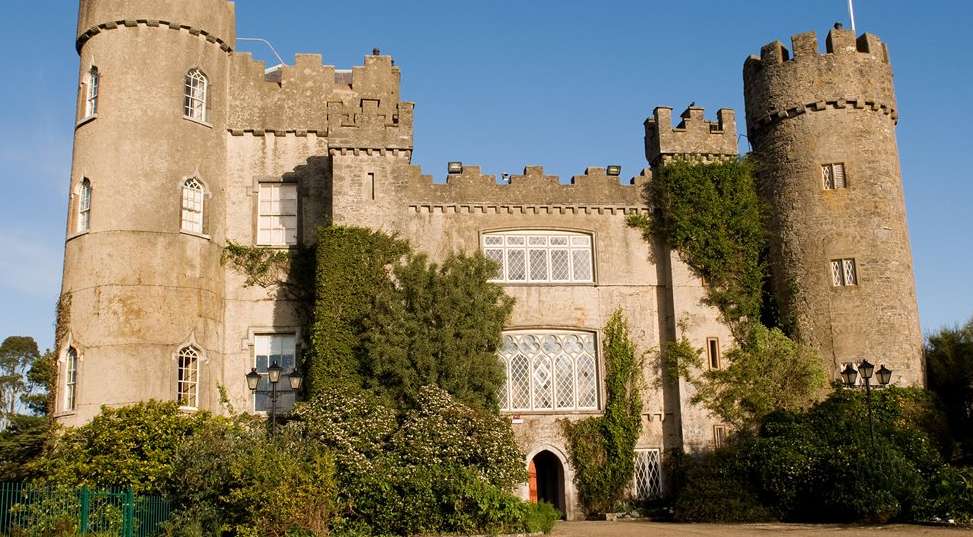 Staying in Dublin and the next must-see castle is Malahide Castle. Located in North County Dublin and with easy access through the use of the DART, Malahide Castle has something everyone can enjoy, no matter what age.

Tours of the over 800-year-old castle take visitors through a history of the castle and the Talbot family who resided there for much of its existence. You get the chance to see private rooms and hear stories of battles, banquets and more! The gardens span 260 acres and are home to over 5,000 species of plants. And if you are a lepidopterist – or butterfly aficionado to the lay person – you are in luck because Malahide Castle Butterfly House happens to be the only butterfly house in Ireland and is called home by over 20 species of butterfly.

Younger people can enjoy the fairy trail, an interactive, 1.8-kilometre trail where visitors solve clues and answer questions as they go. The Casino Model Railway Museum is also just a short walk from the Castle and is another must visit place in the vicinity.

Drimnagh Castle is again in Dublin and while it may have less prestige than its predecessors, it does have something no other castle in Ireland has…a functioning moat which is fed by a small stream called The Bluebell. This unique feature has led it to be a very popular filming location and has featured in Hollywood movies such as Ella Enchanted starring Anne Hathaway as well as British productions such as The Old Curiosity Shop and BBC’s The Tudors.

Entry ranges from €4 to €6 per ticket. The castle is located about 30-40 minutes from the city centre depending on traffic, though the chance to explore this wonderful castle should make up for that. 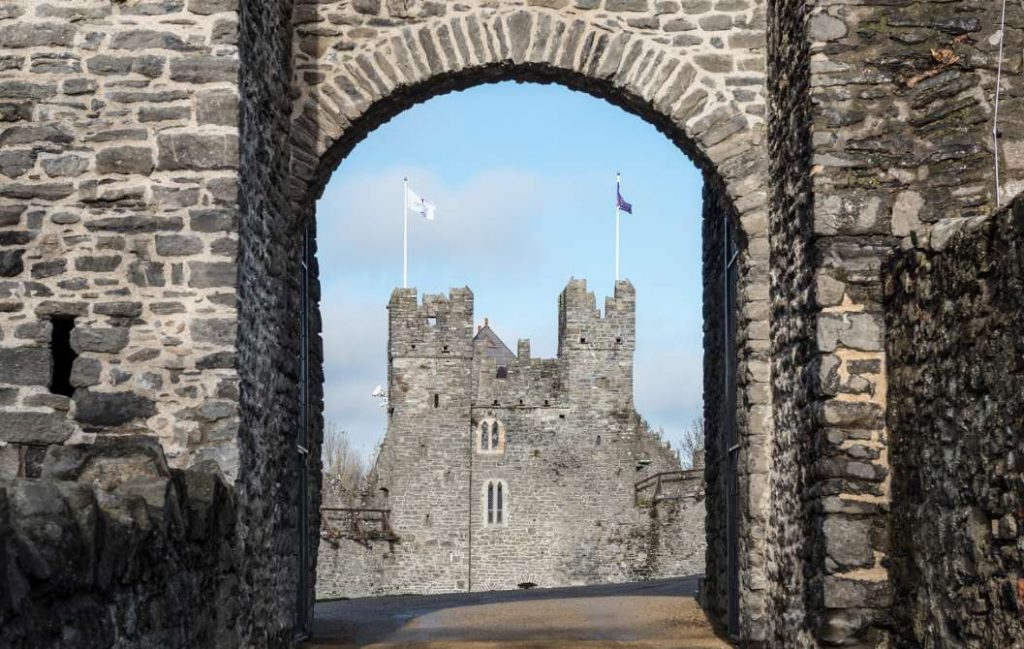 Located in the heart of the town of Swords, the castle is often overlooked in favour of some of its more better known counterparts. The castle was built around 1200 by Archbishop John Comyn as a residence and administrative centre. It is free to enter though opening hours vary depending on the time of year.

The castle has a fully functioning and unusually large chapel that is also available for weddings. As recently as 2017 the remains of three burials were discovered, highlighting the potential need for further excavation.

One of the major benefits the castle has is its close proximity to Dublin Airport. Situated only 2 miles away, the castle is perfect for some last-minute sightseeing before heading overseas.

Now for a change of pace and the first castle outside of Dublin. Leap Castle is located an hour and a half from the capital in Coolderry, County Offaly. Why Leap Castle? Many castles have tales of ghosts and ghouls roaming the hallways at night, making noise and being downright spooky but Leap Castle has more than most. It holds the honour of being the most haunted castle in Ireland. So if you’re the type of person who enjoys a scare and a spooky tale then visiting this castle is definitely for you.

While restoration works continue on parts of the castle, it is privately owned with current occupants. It is not possible to visit all of the structure, though at times visitors can be granted permission to see some of the ruined upper floors.

Trim Castle is located in County Meath, roughly 50 minutes outside of Dublin. The town of Trim itself is filled with medieval structures and only adds to the spectacle of the castle. It is the largest Anglo-Norman castle in Ireland and took over 30 years to construct, starting in 1173. As with so many other castles in Ireland, its majesty has been sought out far and wide and featured as a filming location in the movie Braveheart. An added bonus are the modern walkways that allow you to look down on the interior of the keep and give a sense of the sheer size and scale of the castle.

And if you needed any further reasons to visit Trim Castle, it is located in the Boyne Valley which features some of the richest parts of Irish heritage dating back 9,000 years. A twenty-minute drive from the Castle brings you to the Hill of Tara, the seat of the old High Kings of Ireland and also features heavily in Irish Mythology. Also in the Boyne Valley are Newgrange, Knowth and Dowth, three Stone Age (Neolithic) Passage Tombs that predate the Pyramids of Egypt and Stonehenge.

A journey to Trim Castle and the Boyne Valley holds a world of possibilities.

Your Base For Castles Near Dublin

Now, when you plan to visit these castles, especially if you’re from outside Dublin, a question you may be asking is where is the ideal location to stay in the city to explore such castles and other historic sites?

Why not stay at Maldron Hotel Tallaght? It is conveniently located on the N81, and just off the M50 and N7 motorways, the ideal base for anyone travelling to and from the North, South, East and the West of Ireland!

Enter your details below to hear about our exclusive offers and sales.

Thank you for signing up to our newsletter.

There has been an error and you have not been signed up to the newsletter. Please try again. If the problem persists, please contact us.